These frozen paws are a beneficial snack for dogs dressed up as cute “Santa Paws.” 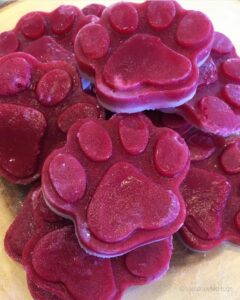 What’s So Special About The Cranberry?

Cranberries are a front runner when it comes to antioxidant berries right next to the mighty blueberry, which is my favorite berry for dogs. Cranberries have a plethora of proven antioxidants in them, some of which dogs fed a raw diet are sometimes low in like vitamin E. Raw cranberries offer phytonutrients & antioxidants such as Quercetin, Anthocyanins, & Benzoic Acid. Aside from the vitamin E, other vitamins & also minerals found in the cranberry that are important for dogs include vitamin C, vitamin B6, vitamin K, potassium, & manganese. Some of the bioactive plant compounds are known to help reduce inflammation and also combat some types of bacteria that cause urinary tract infections.

Raw facts about the cranberry —> Cranberries do contain simple sugars so they aren’t a snack to feed daily to an inactive or obese dog. The skin on a cranberry is where most of the bioactive compounds are so if you were to remove the skin or “juice” the berry, you’d lose these and the fiber benefits as well.

Coconut Oil is an MCT and it’s the “carrier” for the cranberries in this recipe. MCT is the abbreviation for medium chain triglycerides. It is readily available for dogs and it provides what we call quick energy. It’s considered a quick energy food because it doesn’t take a long time to metabolize. Coconut oil is a good choice for both the body and brain when you want your dog to have an energy boost. Appropriate situations for this would be prior and after performance work, intense playtime, and this treat can be given to a lactating female as part of a lactation snack bowl alongside other quick energy foods. We aren’t feeding coconut oil as the main star of this recipe, it’s the best choice for a “vehicle” to the cranberries as said above.

2 US measured cups of raw cranberries (These are not always available so stock up! They keep in the freezer for nearly ever and ever.)

Important Tip: Leave these out on the counter for awhile so they aren’t frozen or cold when you use them later in the recipe. If the berries are not room temperature, they will activate the “solidification” of the coconut oil and the consistency will not be a smooth liquid as is desired.

1/4-1/2 US measured cup of organic coconut oil. This amount varies because it will depend on how steady your pour is when you’re adding the oil to your paw molds.

1/3 US measured cup of organic coconut oil but this won’t be needed until later so don’t get it ready up front.

Pour just enough organic coconut oil to cover the inside bottom of each paw and put into the freezer. Freeze for two hours.

Add the cranberries and 1/3 cup of coconut oil to a blender and blend until smooth. You may need to help the berries along with a rubber scraper.

Spoon or pour the cranberry mixture into the paw molds, filling them up. Freeze overnight.